Women Empowerment Through the Wilderness 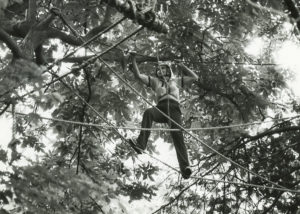 When I was 17, I went on a 26-day wilderness course with North Carolina Outward Bound School. It was an all-female crew and one of the first of its kind for the school.

My journey to North Carolina began with a flight from Washington to Charlotte. There was a short-lived kerfuffle between my mother and me before my trip even began when she insisted that young ladies wear dresses on flights. I eventually prevailed and boarded the plane in jeans and a tee shirt.  I knew I had made the right decision when the van that picked us up in Hickory, NC dropped us off a considerable distance from the base camp and we had to hike in. I think it was raining. Welcome to Outward Bound!

Once we reached the base, I met the other girls in my crew, and the two wonderful people who would become our instructors for 26 days. We also picked up our gear which looked suspiciously like relics from the First World War. The backpacks weren’t backpacks in the way that I imagined backpacks. I think you would call them rucksacks.  They were basically canvas bags with two straps.  They did have one amazing feature though, (I’m being ironic here).  If you pulled out the lining you could use the pack as a sleeping bag!  This turned out to be very useful on solo.

Our first full-day at base camp began with the traditional morning run and dip. I don’t remember whether or not I liked starting the day with an ice cold shower. But I remember how I felt when we gathered to listen as our instructor, Pat, read a passage from Markings, a book of poems and spiritual meditations by Dag Hammarskjold, the former Secretary-General of the United Nations. I was young and not so spiritually aware, but that moment of quiet reflection changed my expectations. I was ready to test my strength and endurance in the North Carolina wilderness. 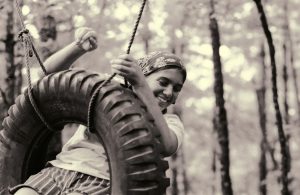 Our days alternated between trips out on the trail and exhilarating yet also sometimes terrifying days on base where we practiced wilderness and life skills. We learned to work with ropes, tie knots and the commands for safe rock climbing. I don’t think I ever made it to the top on a climb. I would get about halfway up and there wouldn’t seem to be another hand hold or toe hold possible. Some of my crewmates were much better at rock climbing than I was, but I remember that I never felt there was a competition. We all had strengths and weaknesses and when we went through tough situations (and there were many of those) and our weaknesses were exposed, we depended on one another’s strengths to make it better.

We liked to promulgatethe theory that we did better than the boys when things got tough because we cold express our feelings and we took care of each other. I don’t know if the theory was true, but we did tend to get pretty emotional. And, as different and as young as we all were, we took care of each other with the steadiness and fierceness of a mama bear, and that made everything possible.

Then there was the ropes course. When I saw all those ropes stretched across the sky and climbed that first tree to go up to them, I had no idea what sort of drama lay ahead. I remember crossing the Burma Bridge surrounded by treetops and the amazing feeling of flying over a rocky canyon on the zipline, where my flight ended when I crashed into a series of mattresses held up by my crewmates to slow me down. 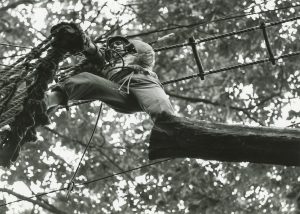 The final challenge of the ropes course was something called the “Flea Jump.” Somehow, I found myself standing on a wooden platform on top of a tree stump. In my memory, I was about six feet off the ground. The object of the Flea Jump was to leap from that platform across to another platform, not quite as high. In theory, it sounds quite doable but, standing atop that tree stump, I felt absolutely terrified. In the movies, people jump from one city rooftop to another and make it look easy. I tried to imagine taking that leap and landing solidly on the other platform. I just needed to do it. It wasn’t so far I told myself, it’ll be fine. I got myself in jumping position, took a deep breath and. . . .stopped. I couldn’t do it.

The minutes ticked by. Our instructors joked about saying goodbye and going off to lunch without me. I got into position again. I would do it this time. I put out my arms and got ready to leap, but it was as if my feet were glued to the wood. I couldn’t make lift off. Instead I flapped my arms like an indecisive flea. (Hence the name.) I started to cry. Why was I so scared? I was so embarrassed. I wanted so much to jump, to get this over with. More crying. More arm flapping. Then. . . .I don’t know what made me do it, but I jumped! My feet hit the other platform and I toppled over, into the arms of my crewmates who were surrounding the tree stump, spotting me. I think that’s what the lesson of the flea jump was all about—not learning to conquer your fears, not pushing yourself to your limit—but knowing that if you fell, you might get a little banged up, but there would always be people to break your fall, as best they could.

Our backpacking trips in the beautiful Blue Ridge mountains were magical. On the first night of our first trip, we set up our camp in the evening, and someone had the idea of sitting in a line, each girl rubbing the back of the girl in front of her. What could be more comforting than a back rub after a long day of backpacking? On another evening, after pairing up with our camping partner for the night, my partner and I found a peaceful spot on a little island covered with emerald green moss, surrounded by two streams. We cooked our dinner over a fire and then went to sleep under the stars.

On one of our trips, we stopped for the night at a shelter on the Appalachian Trail. It was just a lean-to, with one side open and a bed of wire mesh stretched across. Although it was true that we were so tired at the end of each day we could have fallen asleep on a bed of nails, it seemed especially cozy lying side by side on that wire bed, sleeping bag to sleeping bag. I still remember that peaceful night and the feeling of safety I got from being with my crew. 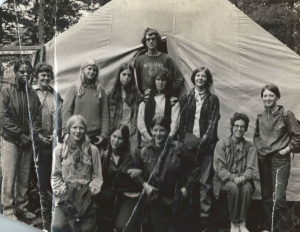 Barbara and her crewmates in 1971. Barbara is second from the right.

We did get lost quite often and, looking back, I still have my doubts about the accuracy of those contour maps we used to navigate the trails. Getting lost would sometimes put us in perilous positions at the end of the day. I remember one night when we hiked down into a steep chasm only to find that we couldn’t go any further and had to climb back out one by one, using our rock climbing rope skills, as it grew darker and darker and the rain started to pour. On another trip, we were lost beside the rushing Linville River. The banks of the river were so steep that I remember propping myself against a tree so I wouldn’t roll down into the water while I slept. The challenges of these trips were meant, of course, to test our problem-solving skills and ability to work as a team. Conflict was inevitable in these difficult situations, but never so much that we couldn’t figure out what to do. We always found our way back.

There were a few moments of loneliness during those 26 days, but the feeling of closeness and security I got from being with my crew was the overwhelming experience. I don’t know why we didn’t stay in touch after we went home, and I’ve always been sad about it. Maybe, the North Carolina wilderness was a world unto itself and our bond didn’t exist outside of it. It would be wonderful to find each other again. If you were a teenaged girl back in 1971 and you came to North Carolina looking for a great adventure, I hope you will get in touch with me. We can share what we’ve done in our lives since Outward Bound and show each other pictures of our grownup children, and it will be as though no time had ever passed.