Challenge That Bonds Us 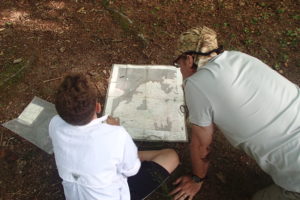 It was 1998, and I received a phone call no one wants, my doctor telling me I had non-hodgkins lymphoma for the second time in my life. Although this time it was first stage, not like the fourth stage “get your affairs in order” 15 years before. I decided that after the chemo was done I was going to take my then fifteen year old son, Ryan Stevens, on a parent-child Outward Bound course, as that gave me something to look forward to and to prepare for.

Argue for your limitations and sure enough, they’re yours. Richard Bach

I began a rigorous workout routine of weight lifting, hiking and running to get myself back into shape after the chemotherapy. I made an effort to get stronger and be ready for the adventure of Outward Bound. My then new Vasque boots were thoroughly broken in before we left for North Carolina.

To venture causes anxiety but not to venture is to lose onself. Kierkegaard

After flying into Asheville, we were assigned a group with four other parents, each with a son and off we went into a van, headed for the mountains. We rode down a bumpy dirt road for seven miles and there we met our two seasoned guides, Grey Wolf (a.k.a Dave Genova) and Suzanne. They showed us how to pack a backpack properly, went over some topographical maps with us and took us on a two mile run along a dirt trail. I put on my 55 pound backpack and our group of strangers began an adventure that would lead us to become close friends as we met the challenges of Outward Bound together.

I went off to the woods because I wished to live deliberately to front only the essential facts of life. Henry David Thoreau

Each day two of us would be group leaders to keep the group together. We crossed streams, got chased by bees, hiked through beautiful forest and open wild flower ranges. In the evenings we would take turns cooking, and every night Grey Wolf read stories to us around the campfire. With Outward Bound’s commitment to the environment and “leave no trace” camping, we learned how to live in the woods in a way consistent with protecting the woods from human consumption. Each day was an exhilarating experience, and every one of us five parents became closer than ever to our own child as well as to each other.

The topographical maps were old and out-dated and many times we got lost. Encouraged by Grey Wolf and Suzanne, we worked together as a group to get ourselves back on the right trail. Although always there to look out for us, Grey Wolf and Suzanne purposely did not lead us. We had to work out problems as a team, and we did.

Climbing is not a battle with the elements. Rather, it is to push oneself to one’s limits to conquer personal fears. Walter Bonatti

Because I had never rock climbed, it was with trepidation I awaited my turn. Ryan went right up the steepest part. No one took  the option of not climbing as Grey Wolf noted to us we will never have this moment again and after we go home we may wish we had faced the challenge. Although I got “stuck” part way up, I just hung there on the side of the rock until I convinced myself to keep going, which I did. The smiling face of my son Ryan and his hand to help me at the top still inspires me today.

Adventure is not in the guidebooks. Seek and ye shall find. Terry and Renny Russell

The high ropes near the end were great fun. Commitment to safety is a major aspect of Outward Bound, and although we dangled in mid-air from rope ladders and a rope bridge high above the ground, we were always protected by a rope vest. Watching the smiles of Ryan and the other young adventurers as we parents crossed the rope bridge pushed aside any temporary fears.

Solitude. People struggle to find life outside themselves unaware that the life they are seeking is within them. Kahil Gibran

Each parent-child team hiked to a pre-arranged secluded spot on Table Rock Mountain for 24 hours alone. Complete solitude, just me and my teenage son. This aspect of Outward Bound, called the Duo, is one of the most important personal events on the trip. For 24 uninterrupted hours my teenage son and I talked about life, relationships, sports, anything that came to our minds. The Duo brought each parent closer to their child than ever before and years later, both Ryan and I still think back on that 24 hour of solitude.

No bird soars too high if it soars with its own wings. William Blake

One more challenge at return to base camp: jumping into an ice cold waterhole. I did it once although Ryan and his new friends kept going back for more. A 5 mile run, and I can proudly say I came in ahead of many younger people, a hot shower and then a final service-oriented project of picking up litter in a state park and we were done.

Now I see the secret of making a better person. It is to grow in the open air and to eat and sleep with the earth.  Walt Whitman

At the closing ceremony I gave my son a pin that represented Outward Bound with the inscription: “To serve, to strive and not to yield.”

Outward Bound gave me physical challenge, enhanced my spiritual growth, and reinforced within me a communion with nature and the cycles of life. But most important Outward Bound gave me a precious gift: the opportunity to see my son Ryan’s self-confidence, his leadership skills and his positive outlook on life flourish and grow. 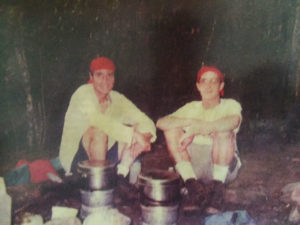 Correale Stevens is currently a Justice on the Pa Supreme Court. Ryan Stevens is a successful attorney, Iron Man competitor and community leader in Flagstaff, AZ.