Diseases, such as Lyme and West Nile, spread by ticks, mosquitoes, and other insects in North Carolina/Florida are uncommon but can be serious.

Lyme disease is the most well-known disease spread by ticks. Lyme disease is most common in the Northeast and Mid-Atlantic US and is highly unusual in both North Carolina (less than 500 confirmed and probable cases per year) and Florida (less than 200 cases per year). Other tick-borne diseases with reported cases in the areas used by NCOBS include Ehrlichiosis, Rocky Mountain Spotted Fever, and Anaplasmosis. There are treatments available for these diseases but prevention is by far the best first step!

Mosquitoes are another potential vector for disease. In North Carolina, La Crosse encephalitis and West Nile virus are present but exceedingly rare. The region of Florida in which NCOBS conducts courses includes subtropical and tropical environments favorable for mosquitos. Mosquito-borne diseases found in the state include West Nile encephalitis, eastern equine encephalitis, St. Louis encephalitis, Chikungunya fever, and dengue fever. The state of Florida is highly active in monitoring and controlling the spread of these diseases and publishes weekly surveillance reports. 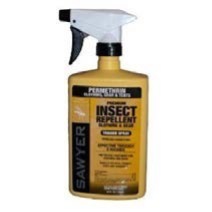 Protocol for Treatment of Clothing with Permethrin
Permethrin is an extremely effective neurotoxin relative to arthropods (including ticks and mosquitos), does not cause harm to humans and, when used correctly, poses little environmental risk. The CDC and the EPA have determined that the benefits of using permethrin to prevent tick-borne disease far outweigh the risks.

Additional Permethrin Information
Permethrin is an insecticide in the pyrethroid family. Pyrethroids are synthetic chemicals that act like natural extracts from the chrysanthemum flower. Permethrin has been used for decades in a number of ways to control insects in homes, for agricultural purposes, and in topical treatments for lice and scabies.

Permethrin is applied to clothing rather than skin because it is deactivated on skin within 20-30 minutes, not because it is more toxic than skin-applied chemicals like DEET. It has less than 1% absorbability on human skin (DEET has 20%), and very few people have adverse effects from contact with permethrin (other than in the eyes). Like most chemicals, there is a small risk of harm, but the risks of tick-borne illness are far greater. Permethrin can affect arthropods (such as ticks and insects) if they eat it or touch it. Permethrin affects the nervous system in insects, causing muscle spasms, paralysis, and death. Permethrin is over 2,250 times more toxic to ticks and insects than it is to people and dogs because of their much smaller size and because ticks and insects can't break it down as quickly as mammals.

MONITORING FOR DISEASE AFTER COURSE

Early recognition and diagnosis of insect-borne disease aids in treatment and recovery. Some common symptoms of infection include body/muscle aches, fever, headaches, fatigue, rash, and joint pain. If you or your child experience symptoms of illness after returning home from course, please consult a physician. (Click here for more about signs and symptoms of tick- and mosquito-borne disease)

There are many symptoms associated with tick- and mosquito-borne diseases. Infected people may not have all of these symptoms and many of these symptoms can occur with other diseases as well. Some common symptoms of infection include body/muscle aches, fever, headaches, fatigue, rash, and joint pain. Seek medical attention if signs and symptoms of an illness appear. Tick- and mosquito-borne diseases are diagnosed based on symptoms, blood tests, and the possibility that the person has been exposed to bites. Most cases can be successfully treated with specific types of antibiotics, especially if treatment is started early. However, some people may have symptoms such as arthritis, muscle and joint pain, or fatigue for an extended period of time.