Walking Off The Map

Our Spring 72-Day International Leadership Semester course hosted 11 students ranging from ages 18-23, from all over the country. Together they traveled to Patagonia, the Florida Everglades, and the mountains of North Carolina. They did a lot together and I had the distinct privilege of instructing both the Everglades and mountain phases of their expedition. Our entire community of staff appreciated their togetherness wherever they went. These young adults, many of whom were seeking a true gap year experience, cast their nets wide and embraced the challenges of Outward Bound and the Four-Pillars.  They would have made Kurt Hahn proud if he were still with us. 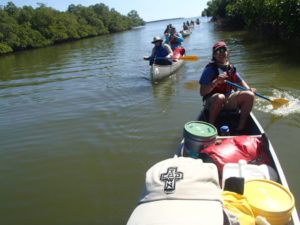 One of the more memorable experiences from the expedition, which students still talked about at the end of the course, was the Shark River Slough. Another instructor and I were their fearless leaders and we were charting a route through the Everglades that had some unknowns. While we had talked with other instructors who had done it, their words of wisdom were a little convoluted; they included things like: “follow the water,” “look for the research station,” or “walk towards the strand of trees in the distance.” My favorite was, “go to the Gulf, then turn right.”

So we hopped in the car after a seven-day “warm up” paddle around the Ten Thousand Islands and drove out to the “middle-of-nowhere” in Southern Florida. It was here that we launched our canoes into a canal.  On the other side of the highway, a pumping station surged forth water that had originated in Lake Okeechobee and the Kissimee River.

After paddling a few miles and reaching the end of the canal, we struggled to find a way forward past the sawgrass, the marsh, the marl, the hammocks, the cabbage patch, and whatever else existed in the amalgam of greenery, water and mud that makes up the Everglades. Not too distant sounds of airboats proved to be a distraction as we looked for the “Golden Path,” to help guide us through an otherwise untrammeled landscape.

Eventually, however, at the behest of their instructors, the crew burst through the trees, pushing their 18-foot aluminum Grumman canoes through the sawgrass. Together we blazed a path through the heart of the Everglades, following in each other’s footsteps until the evening…and then we pushed some more.  Two more days of this, plus mosquitos, 14 knot headwinds, the hot Florida sun, and we never quite found that fabled research station that was our landmark.

Finally, we reached Rookery Branch, which turned from a tiny creek gnarled with mangroves into a river and that river turned into the Gulf of Mexico. For two days, we cheered each other onward, “To The Gulf! To the Gulf!” In this great adventure we had literally walked off the map, and then back on. It felt like we were truly “Outward Bound,” in the words of the students. 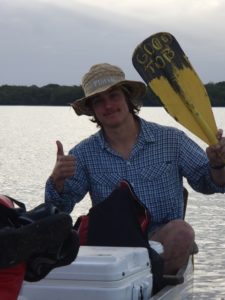 At our closing circle, which included a few tears from both staff and students, one student said, “Getting on that plane in Florida to go to Patagonia was the hardest thing I’ve ever done in my life…and the best.” Others simply said, “I love you all.”  “You all are like family to me.”  Those were our last words as we officially closed out our final day together. During the Semester course, we found our love and belonging. We exchanged the “Golden Path” in return for an epic adventure. We left the busy highways interrupting nature’s natural flow and came upon puddles mixed with sawgrass. We found the Gulf of Mexico and what it means to dig down deep inside of ourselves, and we discovered what it means to go Outward Bound.