Forty feet up in the air, eye-level with the autumn treetops, Rusty Achenbach felt his heart racing as he inched his way across the scariest part of the ropes course — a wobbly beam dubbed “Too Slack Jack.”

“Watching, Rusty,” his spotter called below. Everybody in Crew 6 was watching, rooting for him. Strangers he hadn’t known four days before were now his trusted band of brothers and sisters.

At the end of the ropes course, Achenbach found himself perched on the edge of a platform, stepping into thin air to swing in a huge arc back and forth through the bright leaves. “Awesome!” he yelled.

Achenbach and Crew 6 aren’t the typical teenagers or corporate executives who tackle wilderness adventures under Table Rock Mountain overlooking Linville Gorge. These military veterans have seen combat in Iraq and Afghanistan. Now they were fighting to find peace for themselves back home.

“I’m scared of heights. My boss won’t even let me get on a ladder at work. You guys getting me up there was pretty impressive,” Achenbach said, safely back on the ground as Crew 6 circled up for the debriefing. No adventure goes without a discussion of the emotions released and the lessons learned.

Every ropes course has its significant moment, explained instructor Shane Ambro. “You can feel the collective energy joining one person on part of the course.”

“The look on your face was priceless,” Army vet John Moder teased. “They ought to make you the poster child for Outward Bound. The motto could be ‘You’re dumb if you don’t come.'”

Moder was surprised to learn that the courses were free to military veterans. Outward Bound picking up not only the tuition, but also air travel and hotel stays. 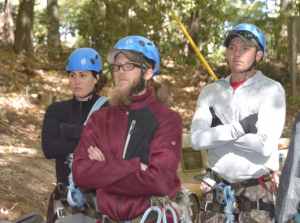 “The vets have given for the country. We want to be able to give back to them,” said Matt Rosky, the veterans program coordinator for the NC Outward Bound School.

The Outward Bound School at Hurricane Island, Maine started a veterans program in the 1970s, working with those returning from the Vietnam War. The programs soon spread to other Outward Bound schools nationwide, but funding started to peter out by the late 1990s.

With the terrorist attacks of Sept. 11, 2001, and the global war on terror with wars in Iraq and Afghanistan, more veterans have gone on multiple tours of duty and cycled back into civilian life, some more successfully than others. With post-traumatic stress disorder, loneliness, depression, anxiety, alcohol and drug abuse, younger veterans are also less likely than older veterans to seek help or counseling at the VA.

The North Carolina school launched courses for veterans in 2009, serving 792 veterans at Linville, the Outer Banks and in the Everglades National Park in Florida.

A significant percentage of vets taking the therapeutic adventures offered by Outward Bound showed significant decreases in anxiety, depression and loneliness, and increased social interaction and self-confidence, a 2013 study showed.

Achenbach, 32, served two tours of duty in Iraq and one in Afghanistan from 2002-10. Now he works as a part-time mechanic and carpenter.

“The military spends years training you to go to war, but then they spend only a few hours debriefing you before you go home,” he said.

Drugs and alcohol became an easy medicine for his loneliness. “After my third DUI, I woke up. I was going to drink myself to death. It took me five years before I could ask for help.” 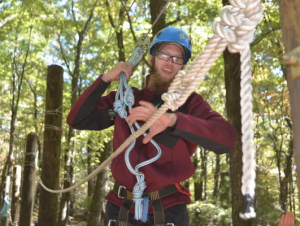 He learned about the Outward Bound veterans courses through his VA counselor in Wisconsin.

Fitting in with a crew of strangers, especially military veterans, wasn’t hard. “Actually it was pretty easy. We were laughing and joking in no time. It makes me think my trust issues aren’t as bad as I thought.”

The relationships forged on rope courses, rock climbs and backpacking treks translate into an ease around the campfire where many of the vets start to talk about themselves, willing to share their stories and what they feel.

“We’re trying to create a space for camaraderie and conversations between the crew members,” said Stiles Rader, an Appalachian State University graduate who started with the Outward Bound as a college intern and slowly worked her way up to instructor.

Instructing veterans was intimidating at first, but she read books about the wars. She tries to be prepared and professional in the field — attributes that military personnel expect and respect. “They do bond as soon as they start training. They get super close.”

The staff work hard to accommodate vets and their needs. “You can’t babysit these people,” said Bernie Trudeau, the chief instructor.

He recalled one vet who arrived, carrying a long Bowie knife. “He said the blade had five confirmed kills, No way was he going out into the woods without it,” Trudeau said. The vet was prone to night terrors, so the instructors made sure the knife was safely out of reach after he went to sleep.

Drugs and alcohol are forbidden, but Outward Bound made an exception for its tobacco ban when it came to the veterans.

“Some of these guys have insomnia and don’t sleep. They might want to stay up most of the night around the fire.” 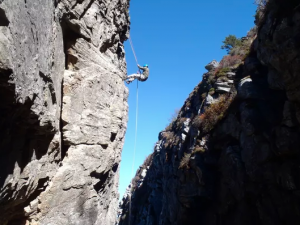 Getting soldiers, Marines and sailors to follow orders isn’t difficult, given their training. Getting them to open up emotionally and socially is difficult. “We’re not therapists, but if you spend time in the wilderness, you can open yourself up to new experiences,” Trudeau said.

Instructors discourage sarcasm and snark when working with teenagers, but they tell veterans are bonding when they start teasing each other.

Rivalries between branches are set aside, along with ranks, salutes and protocol. Everyone is an equal on this field.

“We’re all veterans here. We’ve been through the wars,” said Kenyan-born Samuel A. At 41 he was among the oldest on the course. Still active in the service with tours in the Middle East, he asked that his last name not be given as a security precaution.

Sam liked the time spent in the woods, unplugged from both civilian world and the combat zones overseas. “With no cell phones, it’s just us and nature. You can reflect on positive opportunities and it’s easier to talk with like-minded folks.”

Dawn Cary, an Air Force vet, is a self-confessed adrenaline junkie, eager to go skydiving or tackle the ropes. What really scared her about coming to Outward Bound was the social interaction. Since leaving the service, Cary said she missed the military camaraderie, that sense of shared purpose.

She appreciated the hike up to Table Rock where the crew members had a short time to reflect. They regrouped and raised a cairn of rocks to mark their memories and their time on the mountain.

On the mountain, Stewart Edmiston of Durham reflected on the changes in his life. He had joined the Air Force out of high school in 2001. “We saw the Twin Towers come down during our basic training.” He knew then that military service was serious business.

Now Edmiston works with a nonprofit in Durham, trying to help veterans become entrepreneurs. The time in the wilderness was also prelude to another turning point in his life

The Durham resident had packed not just for his Outward Bound course, but a short vacation afterward with his girlfriend up at Banner Elk. Edmiston was planning to propose to her.

Just as the veterans were wrapping up their four days in the woods, another crew of Outward Bound instructors in training were coming out of the wilderness after 49 days. Waiting for dinner, former Marine Anthony Droz did a few pull-ups on a bar suspended from the rafters.

After two tours in Iraq, Droz said combat wasn’t the worst part, but losing the camaraderie. No matter what hell you were going through, you could count on your buddies.

Back in the States, drugs and alcohol proved no substitute and he was plagued by survivor’s guilt.

Basic training is about breaking a recruit down to follow orders. Outward Bound doesn’t run participants at a grueling pace, but challenges them emotionally and mentally.

Compassion, one of the pillars of the Outward Bound experience, becomes part of leadership, being able to look at people from different perspectives. Droz said he was surprised that he would learn that from seven weeks in the woods.

“The brotherhood you felt in the military doesn’t change when you take off the uniform for the last time, it moves to other areas,” Droz said. He hopes to return next season as an instructor for Outward Bound, serving his fellow vets. “Oh, I”ll be back.”