Lessons From the Blue Ridge Mountains to Mexico 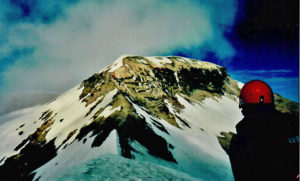 In the fall of 1989 (26 years ago!), I was a student on a 90-day semester course with NC Outward Bound School. I chose the semester course because I wanted to be an Outward Bound instructor. I had always loved the outdoors and had been involved in the outdoor program at school, registering for an Outward Bound course seemed like the logical next step. What better way to immerse myself in the program then to sign up for the longest course they offered? There were 13 of us that started out on course and eight of us that finished. All if us were between 18 and 21 years old ,and we were all there for different reasons.

As I reminisce about my expedition, there are a few memories that I still remember vividly to this day…

1. THE 48 HOUR HIKE: On our first full expedition we got horribly lost, behind schedule and ran out of food. The last “meal’ we had in our packs was powdered milk and wheat germ and only a few of us could actually stomach it. We hiked for 48 hours straight to find our way back to base camp even though our stomachs grumbled, but we finally made it.

We crashed for 10 hours when we finally returned and gorged ourselves on spaghetti and garlic bread. We all felt a sense of success after reaching our destination even though we were two days ‘overdue’ and had eaten all of our food. I think the stupor of hunger and weariness was what helped us plod along despite our frustrations. It is a good lesson in life too; there will be times when even though you are feeling mad or emotional, you have to set that aside and finish the task. After that first expedition we debriefed as a group. We talked about what went wrong, what went right and what we needed to do in the future. Our next group expedition was much more of a success because of it; we paced ourselves better; checked and rechecked maps and compasses and worked better as a group. 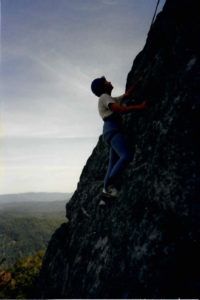 Me, climbing at Little Lost Cove

2. ON THE ROPES: On one of our first days climbing and belaying, one of our instructors asked us to pair up with someone we either didn’t know very well, or didn’t get along with, to help build group dynamics. Within the group there were two people who strongly disliked one another. When our instructor suggested that they pair up, one of them responded, “absolutely not!” When asked why, she responded in a matter of words I won’t repeat here, that she didn’t trust the other person. While perhaps not the most constructive comment that Outward Bound strives for, she definitely spoke her truth. Looking back, I respect her for speaking out when she didn’t feel safe.

3. THE FALL BEFORE THE RISE. At one point our group did a split expedition, which basically means the men and the women split from one another to create two smaller crews and are without instructors. We went into it feeling confident and ready for fun. However, during the trip we got lost (again) in the Lineville Gorge. At some point, we did find our way up and out of it, but even with our new vantage point we were still unclear about where we were.

Eventually the group decided to find the road and hitch a ride to a location that we knew. Just when we thought we were home free however, we were found out by our instructors and placed back out in the wilderness to find our way once again. On our second try, we made it! I still remember the river crossing that had us all celebrating our accomplishment together.

4. REFORMING. During month two, four of our crewmates were sent home. It was a surprise to many and it took our group a few days to process and reflect on everything before we were ready to reform. It was hard having had a group of people you have gone through ups and downs with and then suddenly be faced with finding our own individual roles within the group all over again. 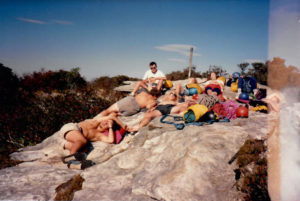 Table Rock climbing day, multi-pitch. This was at the end of the climb.

5. CAVING. In October, it was starting to get cold at night in the Blue Ridge Mountains of North Carolina, so we head into the caves where it was a balmy 54 degrees. It was there that we went into a full round of Father Abraham. Just imagine, 16 of us covered in mud with lantern helmets laughing and singing Father Abraham. We were finally starting to feel like a strong group again.

6. GOING SOUTH. From North Carolina, we drove to the Florida Everglades Base Camp and spent a couple days there preparing for month three where we would travel to Mexico City, Mexico. We were all excited to be there and had our eyes set on the volcano climbing we had been training for. When we touched down in Mexico, there was one person in our group that spoke Spanish (and six other languages), but of course, in typical Outward Bound fashion, we were told upon arrival by our instructors, that they had asked that crewmate to be ‘mute’ for the day. As a group we had our first mission in Mexico: to work together, fully immersed in the culture, and navigate our way from the airport to our hotel.

7. LESSONS IN HUMILITY. Staying at an orphanage in Michoacan we learned some crafts from locals. I remember sitting in the courtyard with a local woman showing us her threading and someone in our crew spoke about the odor in the area. Our course director said, “What you smell is the smell of life.” This was a cultural lesson in what it’s like to be in a place where we don’t cover up life smells with cleaners and such. 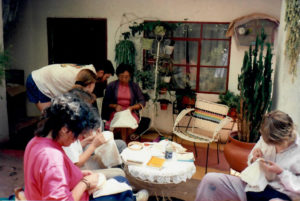 Learning to ‘thread’ in Michoacan

9. STRIVING. How could I forget the case of food poisoning? After eating some street food in Mexico City (chocolate covered bananas – I still can’t eat them), three of us got horribly sick. It was so bad it actually put our volcano climbing in jeopardy;  I ended up being the only one of the three to make it to the summit.

When we summited, I remember feeling surrounded by the many people in my life who had supported me up to that point.  It was a very satisfying experience to share in spirit with them.

Reaching the summit of Ixta in Mexico

10. THE FEAST. After those of us who could summit returned back to camp and regrouped with those who weren’t able, we all hiked back to the village together without instructors as our final night out before finishing the course. That night we had a Thanksgiving meal over the campfire. It is still one of my favorite Thanksgiving memories to date.

I did eventually become an Outward Bound instructor for a short time with a degree in outdoor recreation and a five month internship with Outward Bound Scotland. Today, my outdoor time is mostly spent helping my kids enjoy it and teaching them how to have respect for the world around them.

Did Outward Bound make a difference in my life?  YES. There are still times when I reflect back on my experiences and feel bolstered once again by what I accomplished; there are times when I remember being a part of a group and learning the lesson of working as a team to move forward together; and times when I realize once again how little we can need to survive.

Would I do it again?  YES, or perhaps even better — send my children.  Mostly, the course taught me a lot about respect – respect for self, the wilderness, others, a group, the process, time, cultures. It shaped me to have a broader world view and to understand individual struggles and to find ways to help, and who wouldn’t want that for their child? 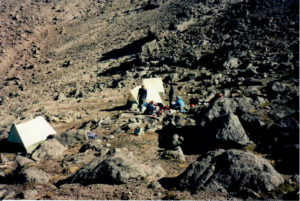