Finding Outward Bound in the Classroom 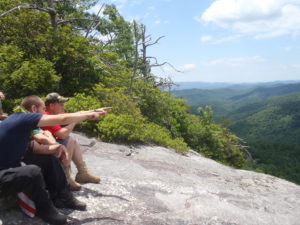 Recent events at Owen High School have made me more committed than ever to the Outward Bound process. What happened here is proof that the group dynamics, the seeds of new friendships, the physical and emotional challenges of Outward Bound took root in our students. They returned to us ready to stretch beyond their comfort zones and make a big difference right here at home.

This story reveals the beauty of it all.

“Wow, could we lose four years of hard work to create a culture of respect for all in just a few days?” It was a question that flashed through my mind several times during one of the more stressful events in my time at Owen High. A conflict between two Latino groups had grown to the point that several students were opting to stay at home fearing for their own safety. The day before one Latino group banned together in a “color war” by wearing red for the purpose of showing solidarity, with hopes of intimidating the opposing Latinos in the process.

What were we to do? My Spanish is quite limited. “Hola” and “Hasta luego” weren’t going to get me very far. Language was only one of the limitations that I had in reaching out to capture the attention of these angry and determined teens. There were deep-­‐seeded cultural issues, assumptions, and aggressions also fueling the conflict. I realized that I would not be able to achieve peaceful resolution without help from others.

I first reached out to our guidance team, our ESL teacher, and our school social worker, all of whom had been involved in trying to de-­‐escalate the conflict for several weeks prior to the “color war.” Together our team gathered all involved parties and coached, cajoled, pleaded, explained, and demanded an end to the conflicts. We achieved what we thought was going to be an effective resolution but over the weekend, more students got involved. They responded, without knowing all the facts, to what they perceived to be unfair and prejudicial actions against all Latinos.

That Monday, more were in red; this time taking aim at the adults. This situation was going from bad to worse quickly. I knew we had to do something more. I was feeling desperate and was concerned that we were on the verge of spiraling out of control and then it came to me -­‐ the students could make the difference we needed. Not just any students, but ones that could walk the talk. There were a dozen students who had spent a week in the woods with Outward Bound last summer fighting to create UNITY so I called on them.

With these students, several counselors and I spent a full day discussing the problem, brainstorming potential solutions, and planning action steps. They took control that day and spread calm and hope in the building. From that day forward, our Outward Bound group became known as the Student Empowerment Commission (SEC). They were poised to make a difference like no other group before them.

For the next two months they planned, discussed and practiced for the most authentic mechanism for student voice that has ever been at Owen High: a Student Speaks assembly. We reached out to a set of parents who came weekly to help the students prepare for the assembly.

What a day Wednesday, December 16 was for our school!

The SEC led a class assembly for each grade level where students could speak out about any issue or topic that they felt needed to be addressed. Our Outward Bound students facilitated from microphones on stage in front of their peers. The teachers and the administrators sat at the back listening to the things that the students had to say. The students melted in the palm of their hands – making suggestions to improve our school, sharing ideas to fix things important to them, and standing up against rules that they felt unfair. It was a real conversation amongst students, for students, by students.

As a former Outward Bound instructor, I recognized the way of the wilderness at work right before me in that auditorium. The SEC students were drawing from their common experience and their understanding of what it means to live in their “stretch zone.” They displayed the courage and the confidence they gained in the woods. They learned that and so much more finding their way with a map and compass, supporting each other up and over Cedar Rock, putting up tarps and learning to prepare their own food and treat their own water. It had worked just as Outward Bound had designed. These young people left the safety of the harbor, ventured into unchartered waters,and sailed away under their own power. Beautiful.

The SEC has met several times since the assembly to look at the suggestions, requests, and ideas. They are now creating action steps to move our school forward. They created a bulletin board and a Twitter feed so the conversation can continue and we will hold another assembly in March. The conflicts between the Latino groups are no longer an issue. Plus, the bonus is that we have started a process for ALL students to have more voice, feel empowered,and have a mechanism for creating change at Owen High.

Experiencing this process first-­‐hand, has made me a believer. Outward Bound’s impact on these students and their ability to lead our school is certainly one of the highlights in my five years at Owen High and ranks near the top in my 15-­‐year administrative career. The SEC was truly great. I am so proud. We must grow other students in just the way we did the SEC members.