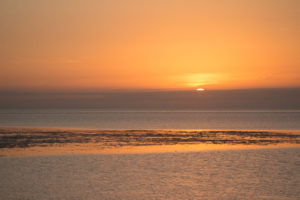 I spent Valentine’s Day alone this year crying on a white sand beach in Florida watching the sun make its slow descent into the Gulf of Mexico.

It’s not as bad as it sounds though. Valentine’s Day happened to fall halfway through my seven-day Outward Bound course and I was on my “solo” (a structured time on course for rest and reflection. Nevertheless, there I was, alone on Valentine’s Day, feeling pleasantly surprised at how positive and uplifting this time alone was for me. I felt happy. I felt a renewed sense of purpose and I felt miles away from the person I was when I met Matt.

This fall I stumbled across a portrait of a man named “Matt” painted by Kerry Dunn I was walking past my school’s art gallery, and Matt’s powerful expression stopped me in my tracks. I slowly began crying. I would describe it as a single, manly, solitary tear slowly riding down my cheek, but it wasn’t. It was an ugly cry. One could just see the pain and sadness in Matt’s eyes; I could feel the sadness emanating from the canvas. As I read the accompanying bio, I learned that he was a classmate of Ms. Dunn who had succumbed to his sadness. Matt took his own life just a few short months after he sat for this portrait. I cried harder. I was scared because I had seen a similar version of that expression in the mirror over the past few months. I was in the midst of a dull “funk”. Nothing super specific, just an imagined the “grass is always greener” kind of funk, and I had been spending a lot of time feeling sorry for myself lately. I didn’t love where I lived; I wasn’t in love with work; I was not loving the stress of my two young kids; I just couldn’t seem to get happy. The one I did know was was that Outward Bound course was in February, and I was hoping that the experience would serve as an escape from the pressures, real or imagined, of the “real world” and help me see it in a new light. You could say that I was using Outward Bound to specifically address a issue; I soon learned that the rest of my Outward Bound crew was looking to do the same.

My wife asked me one night before the expedition, “What kind of people are signing up for this “Adult Renewal” course?” To that I didn’t have an answer, but I started wondering what our common bond would be. Each night during course, we would take turns sharing our short autobiographies around the campfire. It quickly became clear that all of us were searching for something, escaping from something, or using Outward Bound to help get from a metaphorical point A to metaphorical point B. Over the course of the week, with a little luck, fate, and some Outward Bound magic, we used each other to reach those destinations. 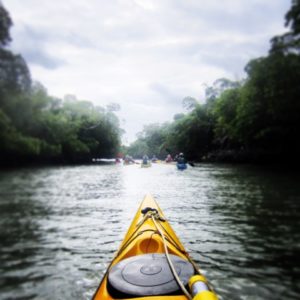 One of the people who helped that process along was our instructor, Alan. Alan is a balance of the Dalai Lama, George Carlin, and John Muir.  He is not only the local historian for the Ten Thousand Islands, but he is also a Mate aficionado.

When he’s not busy instructing, he meditates on his vegetative cliff overlooking a river in the front yard of his Vermont cabin, explores Alaska, and writes the occasional angry letter to his local food co-op about the importation of Chinese Strawberries. Under Alan’s direction, each morning we would “Greet the Day” with an Eastern inspired mindfulness meditation while facing the rising sun and making Tai Chi inspired motions. This ritual was calming for me and offered a spiritual cleansing and an early morning connection with Mother Earth.

After jump starting my daily soul searching through this exercise, I began to appreciate the fate that was associated with our collective presence on these islands. Thousands of decisions were made over time that resulted in the 10 of us camping in the Everglades together. As a result, I wanted to be sure to appreciate the cosmic coincidences that led us all here; I made it a point to try and take at least one lesson from each person in the crew. Some of them were obvious. One crew member reminded me that it was just as important to take care of others, as it was to take care of yourself. Others were inspirations to stay strong in the face of adversity and to set a good example for your kids. Yet another served as an inspiration to stop taking things too seriously, stop over-analyzing, and just have fun.

The person who impacted me the most though was also the hardest to read. Initially, it felt as if we were two very different people, but after a day or two we realized that really wasn’t the case. At times she was my own personal therapist, listening, offering advice, and laughing. All the while, she was emulating the behavior that I want to see more of in myself. Positivity. Patience. Calmness. Through her example, and her presence, I feel like she was the one who ushered me from my point A, to a much better and brighter point B. 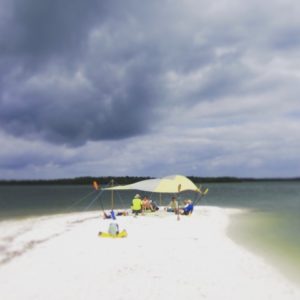 Getting to know people is a fun and exciting process; sadly, it doesn’t happen as much now as it did in high school, college, and in my 20’s. But Outward Bound strips away all of the usual nonsense that clouds our everyday life; it helps you see people in their true light. My favorite part of the aforementioned Greet the Day exercise was part of the words we could recite while during our motions.

Push up to the mountains.

Reach down and connect with the Earth.

Peel off your masks.

Gather into your heart what you need for today.

Push away what you don’t need.

The “Peel off your Masks” symbolism is what I love so much about Outward Bound; it forces you to be yourself, thus you get to experience truly genuine and compassionate relationship-building opportunities. What I don’t love about Outward Bound is that a few days later you are awkwardly and tearfully hugging these new friends goodbye at the airport.

Here we are a few weeks removed from our course in the 10,000 Islands, and I keep thinking about the crew. Sometimes I laugh, sometimes I cry. To become connected to someone so closely, and so quickly, and then have to say goodbye feels unfair. But I am so thankful for the chance to meet them all and learn such valuable lessons from each of their stories. They gave me a fresh perspective that I was able to digest and appreciate.

On solo I had an “ah-ha moment”; I realized that I need to embrace my role as a father. When I actually stopped and thought about it, that’s all I really want to be doing.  It’s everything I want to be. To that end, I actually loved being alone on Valentine’s Day. The irony is, I really wasn’t alone at all. I was spending time with the truest form of myself. The most powerful aspect and the greatest gift of an Outward Bound course is the ability to see your true self and spend time with them. On that day sitting alone on a beach, I had a moment of clarity and an episode of self-discovery, and it was there that I fell in love the person I spent Valentine’s Day with. 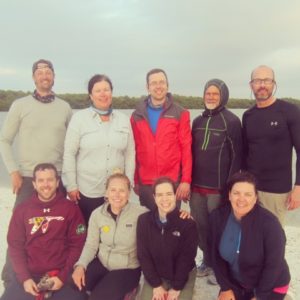